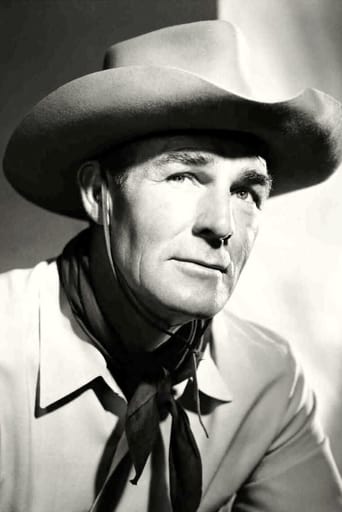 From Wikipedia, the free encyclopedia Randolph Scott (January 23, 1898 – March 2, 1987) was an American film actor whose career spanned from 1928 to 1962. As a leading man for all but the first three years of his cinematic career, Scott appeared in a variety of genres, including social dramas, crime dramas, comedies, musicals (albeit in non-singing and non-dancing roles), adventure tales, war films, and even a few horror and fantasy films. However, his most enduring image is that of the tall-in-the-saddle Western hero. Out of his more than 100 film appearances more than 60 were in Westerns; thus, "of all the major stars whose name was associated with the Western, Scott most closely identified with it." Scott's more than thirty years as a motion picture actor resulted in his working with many acclaimed screen directors, including Henry King, Rouben Mamoulian, Michael Curtiz, John Cromwell, King Vidor, Alan Dwan, Fritz Lang, and Sam Peckinpah. He also worked on multiple occasions with some noted directors: Henry Hathaway (8 times), Ray Enright (7), Edwin R. Marin (7), Andre DeToth (6), and most notably, his seven film collaborations with Budd Boetticher. Scott also worked with a diverse array of cinematic leading ladies, from Shirley Temple and Irene Dunne to Mae West and Marlene Dietrich. He also appeared with Gene Tierney, Ann Sheridan, Maureen O'Hara, Nancy Carroll, Donna Reed, Gail Russell, Margaret Sullavan, Virginia Mayo, Bebe Daniels, Carole Lombard, and Joan Bennett. Tall (6 ft. 2 in.; 188 cm), lanky, and handsome, Scott displayed an easygoing charm and courtly Southern drawl in his early films that helped offset his limitations as an actor, where he was frequently found to be stiff or "lumbering". As he matured, however, Scott's acting improved while his features became burnished and leathery, turning him into the ideal "strong, silent" type of stoic hero. The BFI Companion to the Western noted: "In his earlier Westerns...the Scott persona is debonair, easy-going, graceful, though with the necessary hint of steel. As he matures into his fifties his roles change. Increasingly Scott becomes the man who has seen it all, who has suffered pain, loss, and hardship, and who has now achieved (but at what cost?) a stoic calm proof against vicissitude." During the early 1950s, Scott was a consistent box-office draw. In the annual Motion Picture Herald Top Ten Polls, he ranked tenth in 1950, eighth in 1951, and again tenth in 1952. Scott also appeared in the Quigley’s Top Ten Money Makers Poll from 1950 to 1953.