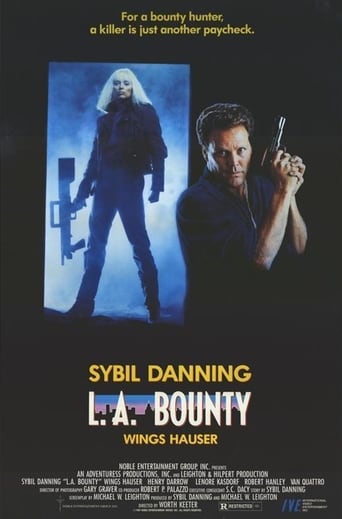 L.A. Bounty is a film that was released on 1989 and directed by Worth Keeter, has a duration of 85 minutes, in languages English with a budget of $3,000,000 and with an IMDB score of 5.4 and with the actors in the cast Branscombe Richmond Wings Hauser Bob Minor . Mayor candidate Mike Rhodes is kidnapped in his own home outside of Los Angeles by unknown, masked terrorists. His wife Kelly barely survives the attempted murder on her, and is able to identify one of the kidnappers. She's placed on the police's protection list while the investigation is ongoing. Ruger, a tough and merciless bounty hunter is out on the streets avenging her partner's death. With Kelly as her bait, Ruger starts a dangerous game to bring Cavanough, a crazed crime kingpin behind the kidnapping, out of hiding.